Mary Schnepf has performed with the Greater Niagara Ballet Company for many years both as a principal dancer and as a soloist in productions including The Nutcracker, Swan Lake, Les Patineurs, Les Sylphides, and Pas de Quatre among others. She is excited to return to the company in her new role as an Artistic Director after directing the contemporary ballet company, Ballet ex Machina, for several years. She has choreographed pieces for the GNBC, Ballet ex Machina and the MFA dance program at the University at Buffalo including Red Poppy, La Danse, For Ellen, End Transmission and Murmuration.

Ms. Schnepf earned her Bachelor’s degree in Theatre Design with concentrations in costuming and set design from Buffalo State College. She later earned her M.A.H. in Film & Performance and her M.F.A in Dance from the University at Buffalo. She completed internships at Artpark (musical theater) and Late Night with Conan O’Brien (NBC). She has an interest in interdisciplinary art including screendance. Her short dance film, Where Emptiness Lies, was presented at the 2018 as part of the 40 North Dance Festival in California and her most recent dance film, As Within, So Without, recently premiered with the Zodiaque Dance Company at the University at Buffalo.

She has performed with various dance and theater companies including the GNBC, Configuration Dance Theater, Neglia Ballet Artists, The National Ballet of Canada, Red Thread Theatre, Buffalo Aerial Dance and Torn Space Theater. Ms. Schnepf received her Cecchetti dance training at the Feder School of Classical Ballet. Under the direction of Beverley Feder, she completed all the Cecchetti student examinations including the Enrico Cecchetti Final Diploma in April 2021. She has also studied ballet and modern dance with Finis Jung, Joseph Cipolla and Ana Marie Forsythe. In addition to her own dance studies, Ms. Schnepf currently teaches ballet, jazz and modern dance in higher education. She is an Assistant Professor in the Humanities at Erie Community College, an adjunct instructor of ballet at the University at Buffalo, and recently taught ballet as a Visiting Guest Instructor at the College at Brockport.

Molly Vine was born and raised in Bemus Point, NY and started her ballet training at the age of twelve with Jill Keating at Pointe Chautauqua Dance in Mayville, NY. She transferred to the Chautauqua Regional Youth Ballet in Jamestown, NY two years later where she studied with Monika Alch, Laurie Donner and Fiona Bell. During summer intensive trainings, Ms. Vine was fortunate to be able to study with Mansur Kameledinov, Denis Malinkine and Tatiana Jouravel from the Milwaukee Ballet, and Daniel Ulbricht and Jonathon Stafford from the New York City Ballet.

From 2007-2008, Ms. Vine studied classical ballet and Martha Graham modern technique at the Hartt School of Dance at the University of Hartford. She then returned to Jamestown to begin her teaching career at the Chautauqua Regional Youth Ballet and to dance for the Renaissance Ballet Company. Ms. Vine danced for the RBC and for Configuration Dance Theater of Buffalo, NY from 2008 to 2012. She also opened and directed the Bemus Pointe Ballet during that time and produced several original productions such as Snow White the Ballet, Peter Pan, Rumplestiltskin and Pinocchio.

Ms. Vine moved to Buffalo in 2012 to continue her dance career with Configuration Dance Theater. She was a guest artists for the Greater Niagara Ballet Company for the ballet Coppelia in 2013 and also for the 2013 and 2014 productions of The Nutcracker. Ms. Vine danced in many local dance productions and companies while also teaching for Configuration Dance Theater and Performing Arts Dance Academy. In 2015, she founded the Buffalo Dance Ensemble and produced several more original ballets including The Twelve Dancing Princesses, Mother Goose, and The Garden.

Molly Vine currently resides in Buffalo, NY with her two children. She is the general dance teacher at the Elmwood Village Charter School and teaches private dance and piano lessons.

The GNBC and NACC production of Silver & Snow will be March 11-12th at the Niagara Arts & Cultural Center Theater. 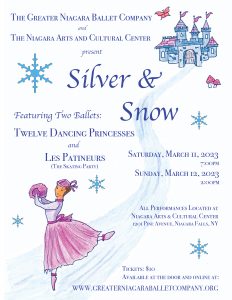